Putting profit before people, climate and wildlife. Why the UK government is using aid money to back oil and gas drilling in protected areas in Africa

To address climate change we need to leave fossil fuels in the ground. While the UK government doesn’t quite go as far as acknowledging this obvious fact, it does claim to be working to “reduce greenhouse gas emissions by investing in low-carbon energy sources”.

The UK has signed onto the Paris Agreement which is supposed to address climate change, and the Convention on Biodiversity, which aims to conserve biological diversity.

The UK government is actively supporting this destruction as part of a new way of looking at aid. In September 2016, in an article in the Daily Mail, Priti Patel, the UK’s international development minister, wrote,

“As secretary of state for international development, my objective will be to challenge and change the global aid system so that it properly serves the poorest people in the world and the taxpayers who foot the bill.”

While Patel talks about “the poorest people in the world”, the reality is that the Conservative government’s plan is to make sure that aid benefits UK corporations.

This policy could have disastrous consequences for people and the environment in Africa, as the following examples show. Greenpeace uncovered more examples in its research.

The UK government has spent thousands of pounds in Malawi aimed at “establishing the UK as the partner of choice in the oil and gas sector”. Much of the oil and gas in Malawi lies under Lake Malawi, Africa’s third largest lake. To the south of the lake is a World Heritage Site.

UNESCO has warned that,

“An accidental spill would pose a potentially severe risk to the integrity of the entire lake ecosystem including the aquatic zone and shoreline of the property.”

A UK company, Surestream, has two blocks overlapping Lake Malawi, one of which overlaps the Nkhotakhota Wildlife Reserve.

Surestream has developed a cosy relationship with the UK government. In 2013, company representatives met with a Home Office minister, and in 2014, the company made a donation to the British High Commission in Malawi to help fund a party for the Queen’s birthday.

At the birthday party, Michael Nevin, the High Commissioner for Malawi, thanked those that had donated, including Surestream, and added,

“DFID [the Department for International Development] too will provide more support to the private sector. This includes working with the Government to create a better enabling environment for business.”

By May 2015, Surestream had sold 80% of its stake in the two blocks and the right to operate them to a company called Hamra Oil Holdings from the United Arab Emirates.

Heritage Oil, registered in Jersey, has exploration licences that overlap Lake Rukwa and Uwanda Game Reserve in Tanzania. The company says it will start drilling its first experimental oil well at Lake Rukwa next year.

In an interview with Energy Boardroom, managing director of Heritage Oil Tanzania explains the company’s strategy in Tanzania:

Heritage Oil is targeting an oil play in Tanzania which would make us the first exploration company to discover oil in Tanzania. Heritage Oil has a track record of success in East Africa; being the first company to explore in Uganda for more than 60 years and discover the prolific Albert Basin.

Heritage Oil told Greenpeace that it will only drill in the onshore area and outside of Uwanda Game Reserve. But that’s hardly reassuring. On the Ugandan side of Lake Albert, thousands of villagers have had their livelihoods destroyed since oil drilling started.

“Oil has already led to the displacement of local communities. This is creating social grievances that could lead to protest and conflict between these communities and government security forces. It’s really not the best starting point for oil in Uganda.”

Noel Lyons, chief executive of Karoo Energy said in an interview in May 2016 that “the plan for us is to become the major shale gas explorer in Botswana”. The company has approximately 160,000 square kilometres of licence area in Botswana.

In a December 2015 article in the Guardian, Jeff Barbee wrote that,

Park officials said that no drilling has yet taken place, but the Guardian found oil sediment on the ground near a popular camp site. There was an overwhelming smell of tar and a drill stem protruded from an apparently recently drilled hole. It is not known who had carried out the drilling or when.

A Total report leaked to Greenpeace reveals that damage to the park has already happened. Greenpeace’s Energydesk notes that,

The ecological compliance study, commissioned by Total, found 283 instances of damage, 159 of which were were found to be “non-restorable”. This included oil leakage; damage to trees and riverbanks and the destruction of termite mounds.

Nevertheless, UK trade officials see Tullow’s operations in the park as an “opportunity” that could be worth more than £1 billion to UK companies. The government is keen to offer Tullow financial support.

Files obtained by Greenpeace via freedom of information requests show that the government has held meetings with Tullow about providing the company loans and insurance backed by UK taxpayers.

A February 2016 presentation by UK trade officials highlights the government’s backing for UK companies hoping to profit from oil drilling in Murchison Falls National Park. Here’s the title page of the presentation: 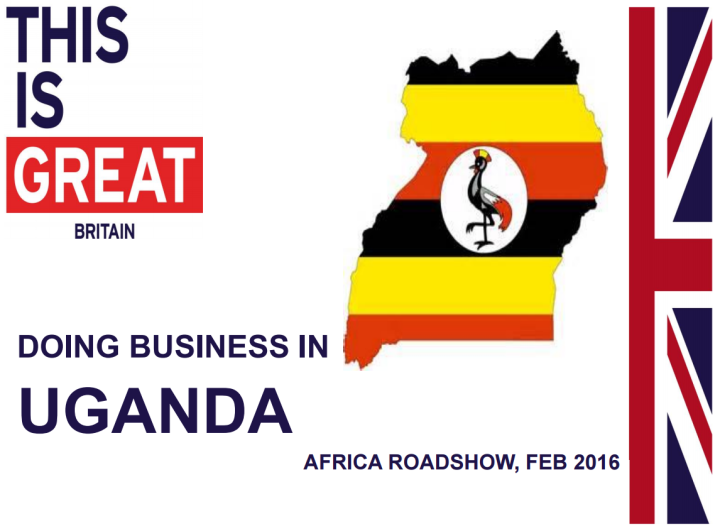